Cameron joined the army immediately upon graduation from high school.  The events of 9/11 that year prompted him to take action to serve his country.  He was deployed to Iraq as part of the A Co. 1/178th Infantry when he was severely injured in an accident on August 23, 2007.  While working as part of a platoon overseeing witnesses and detainees at the Central Criminal Court in Baghdad, a rooftop caved-in, plunging SGT Crouch seventy feet to the ground.  As a result of landing on his feet on a marble floor, Cameron suffered devastating injuries to both of his legs requiring nearly 20 surgeries including the amputation of both legs below the knee.

After a series of hospitalizations around the country, including Walter Reed,  Cameron and his wife Christy now live in Mahomet, Illinois.

Cameron’s future goals include completing his college education in the healthcare field so he can pursue a career as a doctor.  His wife, Christy, a recent  graduate from the University of Illinois is a kindergarten teacher at a local elementary school. 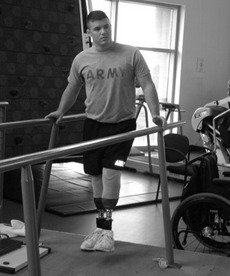 Daniel served in the United States Marine Corps for eight years; four were active duty with two years in Iraq.  He was first deployed to Iraq aboard the USS Duluth in 2004.  Prior to his time served in Iraq Dan’s battle group was diverted to Sri Lanka in December 2004 in response to the tsunami to  provide humanitarian aid to the survivors.  In January 2006, Dan was deployed to Al Karmah, Iraq for seven months. It was during that deployment that eleven Marines from his battalion were killed; including five close friends from his company.

Dan was honorably discharged  from active duty in October 2007 and from Individual Ready Reserve in October 2011.  He achieved the rank of E5 Sergeant in four years and has been awarded over ten medals and ribbons for his service.  Dan returned home following his service without the visible wounds of war but with the unseen disability of PTSD that many combat veterans face.   It was in June 2012 when Dan suffered a traumatic C5 cervical spine injury in a freak accident that has left him in a quadriplegic condition.  He is waging the biggest battle of his young life as he fights to recover and walk again at the Willow Springs Next Steps program.

He attended Northern Illinois University with a major in journalism and worked on campus in the VA office.  He has dreams of becoming a journalist after college and his recovery. 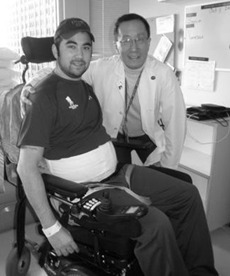